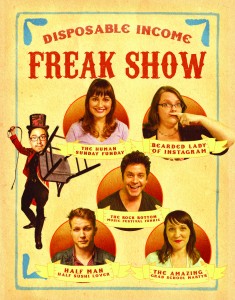 I’m humbled and blown away that DonnyRodriguez.com made my monthly sketch spectacle, the Disposable Income Freak Show, a critics pick for the this week.  The aforementioned show (again, DonnyRodriguez.com’s praise makes me blush) is Friday (1/30), doors at 7:30/show at 8:00 at The New Movement!

Here are the top 5 reasons you should see the show:

5. It’s like a circus show with curiosities and oddities (“bros” and “basic chicks”)!  Who doesn’t love clowns/people who scream shit for no reason?!?!

4. It costs $5.  Cheaper than a craft cocktail on the Eastside with half the pretension!

3. It’s the perfect date from ages from 21-102.  Our show gets you, it’ll help you tongue kiss randos. #TheStruggleIsReal.

2. This isn’t like any other sketch show! I’m sure there’s not a sketch group on earth that hasn’t said this about their own show! After years in Chicago performing sketch in bars and during standup/music shows instead of theaters where sketch works well (my group Wood Sugars never trained at the pay-to-play institutions like iO or The Second City) , I had to create a spectacle that drunks would put down the Bud Light Lime and STFU!

DIFS is different but wouldn’t call it alt-comedy, it’s just different–like when Imagine Dragons came on the scene and changed the alt-rock radio game!!  In any given performance, the fourth wall is broken as I do crowd work in between pieces.  There’s a tight through lines throughout, characters have arcs and it’s full of call backs & easter eggs for the attentive audience member.  It’s written more like a theatrical play with sketches as Donny Rodriguez writes 91% of the first drafts and then rehearsals shape the show/jokes into the theme.  There’s maybe 3 tech cues, the actors sit in the crowd…it’s just different.

1. The Actors.  (maybe cut all this–go straight to actor praise) Four months ago, I only knew maybe four of my 13 actors, and I only “knew” two of them for about three months prior.  I never took a class with any of these folks, but they all took a chance on me. Their talent and dedication is why you should see the show, especially because of:

Adam Weightman– This guy is the Tasmanian Devil of comedy in Austin.  You wind him up and he’ll overwhelm you with a tornado of funny.  He’s also a habitual criminal, in the sense that he steals every scene he’s in. I’ve also seen him share some sincere and kind prose. Dude is an artist.

Alex Kone– Alex, along with our friend Henry Linser gave me my first shot to prove my comedic worth in Austin about 10 months.  Alex sees the big picture and minor details at the same time with sketch.  He has a helluva range as a performer and is much more dynamic than his self-deprecating persona will lead you to believe (make him do his Al from Al’s Used Cars character if you ever meet him.)  He’s smart funny as hell, and an awesome bud.

Nathan Ehrmann-Nathan is a comedy savant.  Not the weirdo kind of savant, but like the kind that is determined to make happen what he wants to make happen.   Spoiler alert: it’s gonna happen for Nathan. Composure, stage presence, perpetually in the moment, Nathan’s strongest attribute is that he has a stronger understanding of what’s funny and why than most do.

Douglas Hienz– I’ll use a baseball analogy to describe Douglas.  He’s a young Triple-A prospect, whose forcing the general manager to make room for him on the roster and use him as much as possible.  He’s funnyman to keep an eye on.

Patrick Nesse-Patrick can stop on a dime and go from an affable character to an angry one in a given scene; he can go from endearing to dark in an instant, and he’s always unassumingly charming on stage.   He’s going to make noise as a sketch actor in the coming months.

Chris Sebilia-Chris Sebilia (prounned: ¯\_(ツ)_/¯), is my producing partner, and a ballast for my frenetic waves of emotions in comedy.  Chris is driven, ambitious and legitimately unafraid of any comedy challenge.  Be it sketch, improv, stand-up, hosting, writing, this dude does it all–he’s a jack of all trades and a future king in all of them.  He’s also a good friend, a deserves his success.

Chance Garcia- Chance is an information and art junky, which makes him such a refreshing sketch writer.  The usually reserved Chance is so GD funny when he plays an pissed off character.  He gets better from month to month at everything, and will be a part of DIFS 4 eva, and I look forward to collaborating with him.  Also, is my favorite person in Austin to get a beer with and have a conversation about life.

Greg Moreno-After years of writing comedy, I rarely laugh at comedy shows I write.  Greg for reals always makes me laugh with whatever character he’s playing.  He’s a natural performer, and even with few lines in a scene he makes you notice him.  If I’m making a basketball analogy, he’s a lower-usage, ultra-efficent player like any or all of the San Antonio Spurs. Go Greg Go!

Taylor Richardson- Taylor joined the Freak Show for our December gig, and there’s no way I’m not having her in every show from here on out.  I recently shared a scene with her opening for Kids In The Hall god Kevin McDonald, and Taylor & my characters interacted in a way that was the most fun I’ve had on stage in a long time.  She had a laugh break that’s practically still going on.  Her acting chops are will take her as far as she wants to go.

Clayton Cook-As someone who always writes the best male parts for himself, Clayton’s visceral interpretations of characters, Mr. Cook is practically my dude-muse.  There’s nothing I’ve thrown at him, that he hasn’t taken to the next level.  He plays everything honestly which, honestly, is hard to do in sketch comedy as most are condition to go for the laugh.  Austin is really into “Next Big Thing” lists, so let’s throw this guy to one of those lists.  He’s a one-man buzz band.  Buy stock in him early, while it’s still affordable.

Julia Salas- Julia is the DIFS’s Sandy Bullock.  She’s shines equally in our “romantic comedy”, poignant, dense, pathos-y and absurd scenes.  She comes at every sketch as an actor first which makes them even funnier. I always enjoy watching her scenes from backstage and focusing on the audience–she captivates their attention. It’s intimidating with how good of an actress she is, but once lights are up, her pieces come off effortlessly.

Amy Jordan-Amy is The New Movement theater.  She gives per pose to every line.  She’s insanely articulate with every movement on stage. Her instincts are always on point. Basically, I’ve learned more about comedy from here than I legitimately ever did in Chicago.  I now write specifically for her.  What she does can easily translate to NYC or LA, so I remind myself that it’s kinda crazy that you get to see Amy for only $5.

Lindsay “L” Hejl- L is an improviser by trade, and much more by any measure.  L attacks the stage and the sketch writing process like a “Bad B****”(“Bad B****” is her words, not mine).  She’s untypecastable.  Any role she’s in, she fully encompasses.  I genuinely mean this when I say, from show to show, rehearsal to rehearsal, she’s ups her game and she has a big year ahead of her.

Steph Childress- To put it lightly, Steph is prolific and the anchor of the show.  She does so many thankless jobs (which I thank her for) like editing my typo filled, dyslexia-fueld scripts, she asks the right creative questions in each scene during rehearsal, organizes set lists, consistently pitches funny punch ups, oh, and just straight dominates roles/scenes.  Whatever the character, she brings a real life compassion to each role she plays. We’re fortunate to have her lending her talents to our dog and pony show (which I thank her for), as she could easily jump on a major dramatic/comedic production and own it.

Frankly, I had no business writing 1.3k words on my own show, but I was compelled to do this based on how much these people mean to me and my “passion”.  Comedy, like any artistic genre is filled with insincerity (ReTweet if you’re a performer and someone condescending-ly said “great set, that was a lot of fun/looks like you had a lot of fun up there”.)  Fuck insincerity.  That sentiment is why I created the Disposable Income Freak Show.  I wanted my “art” to connect with people on a level that makes you feel optimistic about other humans as much as it makes you laugh.

Thanks again to DonnyRodriguez.com for the courage to post this braggadocios op-ed.  They really know what they’re doing at that site.